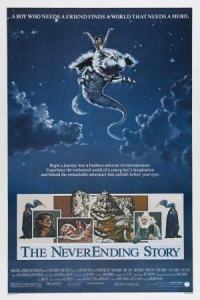 On Tuesday, 07 September 2016, select movie theaters across the U.S. had a special screening of the 1984 classic, the Neverending Story. Immediately after work, I changed and drove over an hour to get to the closest theater to me, as this was a movie I enjoyed greatly in my childhood and also own in my collection.

“On his way to school, Bastian (Barret Oliver) ducks into a bookstore to avoid bullies. Sneaking away with a book called “The Neverending Story,” Bastian begins reading it in the school attic. The novel is about Fantasia, a fantasy land threatened by “The Nothing,” a darkness that destroys everything it touches. The kingdom needs the help of a human child to survive. When Bastian reads a description of himself in the book, he begins to wonder if Fantasia is real and needs him to survive.”

One of the absolute best parts of this special release was the opening 30-minute documentary that talked about how and why the movie was made. The puppeteering was absolutely phenomenal and I had no idea how much time, money, energy, and resources went into making movies of this nature before our current special effects technology. It was one of the first movies shot using the new blue/green screen option, but everything had to actually be created. Like a thirty-foot luck dragon, a giant rock-biter, Gmork, and so many others. Additionally, each giant puppet had so many different levers and people who were experts on mechanics that it took several people just to conduct facial movements. The documentary was absolutely fascinating and well worth the time normally spent on previews.

The movie itself is a classic. It came out during one of the most imaginative eras of my life so far. I sat in the movie, knowing every line and every scene but still having a wonderful time. Also, since it was on the big screen with surround-sound, theater-quality stereo, some portions of the movie which are difficult to discern while watching on a home television are actually made fairly clear. Like the crucial end scene when Bastian screams into the storm, I could never hear what he said, and I think I liked it better that way. I think I liked the imagination of coming up with a beautiful name all on my own. I was also a little surprised that I could hear what Bastian whispered in order to close the movie out in a full circle. Again, I think I was more satisfied imagining things to say if I ever wound up in a similar situation. But other than those two interesting portions, I very much enjoyed watching the movie on the big screen for the first time that I can remember.

Overall, this movie remains a three on my rating scale. I’m both glad that I own a copy on DVD and that I got a chance to see it with some great people in a theater.

Just another crazy person, masquerading as a writer.
View all posts by C.A. Jacobs →
This entry was posted in Movie Reviews and tagged Movie Review, the Neverending Story. Bookmark the permalink.