Typically, I have this rule which states there are three things that you never discuss at the bar: politics, religion, and the other person’s wife. So while I don’t typically post about these things, I feel as though the present situation warrants some sort of discussion. I know that posting my thoughts will have no impact and that those who are acting as a toxic poison throughout our world will continue to do so but I feel as though sitting by in silence is only allowing that evil to grow.

One of the people on my social media feed posted a comment today about how one of the current U.S. Presidential candidates bragged about sexual assault. One of the comments on this posting referenced how that particular candidate has surrounded that particular campaign with good, Christian people with good, Christian values. While I am no expert on Christianity and their Bible and scripture, I am curious as to what kind of Christian values are being supported by someone who is blatantly selfish, arrogant, misogynist, and dishonest at the very least. The individual who made this comment on social media seems to think that these “Christian” values are more important than allowing socialism to take over the rules which govern this country.

Again, I am not an expert on the Christian scripture or Bible but I do remember a sermon I heard once which discussed how Jesus encouraged people to feed the hungry, clothe the naked, provide shelter for the homeless, care for the orphaned and the widow, and the foreigners in your midst, and treat everyone as brothers and sisters. I can’t recall anywhere in those teachings where anything was said along the lines of “kill and shame everyone who isn’t like you”, “abuse whatever power you have to get what you want to increase your own greed and comfort”, or “only your own personal pride matters.”

One of the interesting parts about this is that those who I know who say they are devote Christians and who want these “Christian” values embodied are people who are unwilling to accept simple truths along the lines of how if Jesus was a desert nomad, there’s absolutely no way he was a white guy. That much time in the desert sun would make him the exact opposite of a white guy. So all the rhetoric against different people includes people of different ethnicities, different races, different sexual orientations, and just like with what happened with Nazi Germany, that list will grow. “Reasons” will be found to persecute anyone and everyone who doesn’t fit a certain profile and that profile will change over time to include everyone.

The comments on that post made me realize that it’s not random, unknown strangers who will be pounding on my door with pitch-forks and flaming torches. It’s my neighbors and coworkers and people I know who will be dragging me out of my home to beat me, rape me, and torture me because I am different than their “beliefs” tell them people should be. And that good which is silent is actually an accomplice to evil. So while there might be those who will disagree with the mob-mentality of destroying those who are different, they will remain silent in order to keep themselves and their families safe. Eventually, even those who are silent will pick up a pitch-fork and a flaming torch.

The U.S. citizens in this election are put in a position where there is no right answer. The main Presidential candidates are not ideal choices. People on both sides talk about “the lesser of two evils” but I’m not sure there is such a thing because there is apparently enough public support out there for a campaign built on hatred disguised as “Christian values” to make those of us who are different worry about impending physical abuse and death at the hands of people we know.

Everyone is allowed their opinions and their beliefs. But when those beliefs and opinions threaten my life and the life of those others who lead “alternate” lifestyles, I start to be concerned. Just to be clear, when I reference “alternate” lifestyles, I am referring to the fact that I am asexual. I have no idea why not experiencing sexual attraction makes me a deviant with the exceptions that it means I have even less desire to procreate or make myself subservient to any male, which is apparently against the “Christian values” those certain supporters of hatred embody. It is not just myself I worry about, though. It’s everyone of minority religions, minority ethnicities, minority races, minority sexual orientations, minority genders. It’s everyone who doesn’t fit the prescribed “norm” who I worry about if this new dystopian future comes to pass. 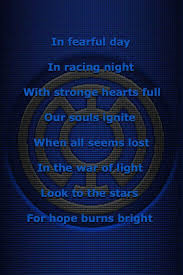 But because I am also a firm believer in hope and the goodness of the people around me, I will end this post with an idea. It’s a radical idea, granted, but it’s what I’ve been working on for the last several years. The world is getting more and more filled with hatred and bigotry. Take the time and energy to combat that hatred and bigotry with love and compassion in everything you do. Judge people less. Be the best person you can be. Be kind and generous to the best of your ability. Generosity isn’t just financial, but also in your character. If you have nothing material to give to others, give them support to their dreams. Encourage artists to draw, writers to write, dancers to dance, musicians to play, people to create. Smile at strangers and tell them something positive about them, even though you don’t know them. Compliment their smile or their patience. There is positive in every person and in every situation. The world needs hope, compassion, generosity, kindness, laughter, and love more than anything else right now. We all, each and every one of us, have the responsibility to work to make the world a better place, no matter what happens with politicians and “the people in charge.”

Just another crazy person, masquerading as a writer.
View all posts by C.A. Jacobs →
This entry was posted in Internet stuff, Randomness and tagged personal, politics, religion. Bookmark the permalink.