The next book I read in my reading marathon of the Heralds of Valdemar books by Mercedes Lackey was Winds of Change (fantasy 472 pages), the second book in The Mage Winds trilogy. 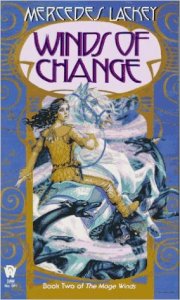 “With Valdemar in dire peril – threatened by the malevolent spellcraft of Ancar of Haldorn – Princess Elspeth, Herald and heir to the throne, has come to the Vale of the Tayledras Clan to seek Mage training among the magical Hawkbrother Adepts. But instead of finding a haven, she is whirled into a maelstrom of war and sorcery as the Vale is attacked by a mysterious Dark Adept from out of the ‘Uncleansed Lands.’ And when the Heartstone, the source of magical power for the Clan, is warped by evil sorceries and turned into a dangerous rogue, disabling the most powerful of the Hawkbrother Adepts, Elspeth – still only a half-trained Mage – and the renegade Hawkbrother-Adept Darkwind must struggle to tame the rogue Heartstone before the next strike of the Dark Adept, risking the perils of the unknown in a desperate bid to save both their peoples.”

As with most trilogies, the second book contains most of the character development and the “middle” stuff, which means it’s not the beginning where everything is new and the characters are in vastly different situations, but it’s also not the end with all the page-turning action.

There are some very interesting passages in this book, as I’ve found in all of the Valdemar books so far. There was a section on page 114 that really stuck out with me because of the way our world is right now. “To be effective, one who would betray others must be likable and plausible – while all the time being something else entirely. He must be a supreme actor, projecting warmth and humanity, while having a cold, uncaring heart. Someone who is a criminal is likely to be all of these.” I’m constantly amazed at how authors who write about fantasy and science fiction are often more capable of teaching us about human nature than our own leaders. I’ve learned so much about how to interact with people better and to see things through other people’s eyes just by reading science fiction and fantasy than by reading or exposure to any of the “literature” so often forcibly taught. The interesting parts about the Valdemar books is that they are a clear separation between good and evil, how evil can’t create anything on its own and wants to possess things instead of make the world a better place; how evil only pretends to care in order to serve its own greedy, selfish desires of gaining more power and wealth. And we see this evil growing more and more powerful every day in the modern world we live in. And yet, Elspeth, Darkwind, Skif, Nyara, Treyvan, Hydona, and all the different people who live in and around the Vale continue to strive against all odds to fight back that evil.

As the book progresses, Elspeth enjoys the luxury of the Vale and thinks about how it would be so easy to become much lazier and spend more time on “frivolous” activities. But life outside the Vale is harsh and she realizes that all of the “luxuries” in the Vale are ways to make a harsh life more bearable, not a way to encourage any sort of shirking of their duties.

There was a line in this book that made me absolutely laugh out loud on page 392: “One did not pick quarrels with edged wit or edged weapons.”

Overall, this book was interesting and the character development was good. I’m more excited to continue reading and getting to the next book where everyone travels back to Valdemar and how interesting it will be to have so many different cultures introduced to each other. I would probably rate this book as a solid or low three on my rating scale. I’m glad I own it and I’m positive I will read it again in the future.

Just another crazy person, masquerading as a writer.
View all posts by C.A. Jacobs →
This entry was posted in Book Reviews and tagged Book Review, Mercedes Lackey, Winds of Change. Bookmark the permalink.