The next book I read in my reading marathon of the Heralds of Valdemar books by Mercedes Lackey was Winds of Fury (fantasy 423 pages), the final book in The Mage Winds trilogy. 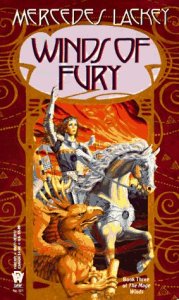 “Valdemar is once again in peril, threatened by Ancar of Hardorn, who has long sought to seize control of the kingdom by any means at his command. Yet this time Ancar may well achieve his goal, for by harnessing the power of Mornelithe Falconsbane, the Dark Adept, he has set into motion a magical strike against Valdemar the like of which hasn’t been attempted in more than five hundred years – not since Vanyel, the last Herald-Mage, shielded the kingdom from attack by the deadliest of sorceries. And with Valdemar’s ancient spell-generated protections finally breaking down, Queen Selenay, Herald-Princess Elspeth, and their people could soon be left defenseless against an enemy armed with spells no one in Valdemar has the knowledge to withstand. But as the long dormant magic of Valdemar begins to awaken, Elspeth finds that she too has a mysterious ally – a powerful spirit from the long-forgotten past.”

This is probably my favorite book in this series, and I think that’s mostly because everything happens in this book. Elspeth, Gwena, Skif, and Cymry finally return to Valdemar and they bring such an interesting array of friends and allies with them that all of the interactions in Valdemar had me chuckling. Everything from when the entourage first arrives back in Valdemar and how their hosts aren’t properly prepared for the entourage’s arrival and how the Heralds themselves are amused by how flawed the communication was between the arriving group and the hosts to the magic lesson taught in Valdemar itself was expressly amusing to me.

So many parts of real life are represented in this book that it’s hard to pick out particular portions and point to only those portions as the reason I enjoyed this book so much. The issue of sexism is often discussed in a variety of ways, including Elspeth’s treatment by all of the noble folks of Valdemar and their gossip into her personal affairs and into Nyara’s fears about whether or not Skif would continue to love her if she wasn’t exotic and sexualized. I think Nyara’s sexualization shows how much of a fine line it is between women knowing how men view them as sexual objects and how women can take charge of their own lives and their own bodies to live the lives they choose for themselves instead of the lives chosen for them by the men in their lives. This kind of deeper issue is only present if you take the time to think about and it’s certainly not an overwhelming part of the book, but rather presents something a lot deeper to think about if your mind is open to thinking about the societal roles pushed by the current western culture.

One of the best parts about this book is the clear demonstration of a variety of positive relationships.

Elspeth and Darkwind eventually pair off, but I’m fairly certain that it’s been standard practice in the fantasy publishing world to have some sort of romantic pairing, especially amongst the main characters. While I think this potential genre troupe is changing in our world right now, I think back in the 1990s when this book was published, romantic pairings were officially or unofficially required as part of the storyline. Granted, Elspeth and Darkwind work very well to show what a true, equal partnership should look like. They are both individuals with completely separate personalities and also different strengths and weaknesses, but they work very well together. The sum of their parts is greater than their individual components, but they are both fully capable of living their own lives and making their own decisions. They work together, not with their own separate agendas, but with the full understanding that they each have oaths and a driving purpose to serve something bigger than themselves. They trust each other to take care of things they each need to do and then to stand together when it’s time. If one of them slips or falters, the other will help.

Even Skif and Nyara have a very healthy relationship. Back at the end of Winds of Change, Nyara makes a conscious decision to work towards being her own person so that she can be a true partner for Skif. Need has a lengthy discussion with Nyara to help her realize that Skif is looking for a partner who can hold their own and perhaps even save him once in a while. Nyara has to work towards seeing her own value and not just the value of her physical and exotic beauty and that’s hugely important.

This book also has unpartnered people such as Need. Granted, Need is an old mage-smith whose soul is contained within a magically enchanted sword, but even before she bonded to the sword, she had no interest in mating or life-partnering. Need is as close to a true asexual in any of the earlier fantasy books I’ve read. While these days, it’s common for authors to attempt to include greater diversity in their stories such as increasing diversity by offering characters with a plethora of ethnic, racial, gender, and sexual identities, this is true representation in the fact that it wasn’t written just so the author could play a “diversity card” with their work. This is the first book in the Valdemar series where Need has a lengthy physical description and it all fits her personality perfectly, and in all of the books where Need is a true character, even though she doesn’t have a normal, human body, a sexual partnership just isn’t on her list. She soul-bonds with her users and that is a very tight bond where she functions as a teacher, mentor, experienced warrior, or mage, depending on what her bearer requires, and I would say she deeply loves all those she bonds with and wouldn’t want a sexual partnership even if she had a human body to have one with.

There’s a passage on page 112 that specifically discusses lifebonds and how someone who has a tendency towards deep depression is more likely to develop a lifebond and that lifebond will help that internally burdened person focus on someone other than themselves, which helps them get through things in their lives. Maybe it’s because of my own constant internal turmoil that deepens my feelings for the people I care about in my life and that’s why this entire section struck me as extremely powerful and right on the mark.

Overall, I’d say this book is probably a low four on my rating scale. I’m absolutely happy that I own this book and will definitely read it again in the future. In retrospect, I’m fairly certain the main reason I read the other two books in the Mage Winds trilogy is so that I can read this book with a more in-depth understand of what was going on and why.

Just another crazy person, masquerading as a writer.
View all posts by C.A. Jacobs →
This entry was posted in Book Reviews and tagged Book Review, Mercedes Lackey, Winds of Fury. Bookmark the permalink.