“Welcome to a world not our own, where a man named Charles Xavier never formed a team of young outcasts to protect the planet from the threat of evil mutants. Where a war between the two species of mankind has laid waste to civilization. Where a being who believes the weak should be crushed under the iron heel of the strong lords over all. Welcome to the Age of Apocalypse!”

I think one of the main reasons I’m so drawn to rereading these stories from my youth is that I have always pictured my own novels more in graphic novel format and less as words on a page. Granted, I like both different formats for books, those with only words and those with pictures and words, but sometimes my mood dictates which I would rather read. The Age of Apocalypse remains one of my absolute favorite comic book storylines for a lot of reasons, probably at least partially because of where I was at in my own life when these originally came out, partially because of the fascinating story and characters, and mostly because of how much I relate with so many of the things the characters experience.

The main focus for characters in this book are Clarice Ferguson (Blink) and Nathan Grey (X-Man), with Magneto, Rogue, Gambit, Cyclops, Havok, Sabretooth, and Mr. Sinister also having a good portion of back story and character development. The interesting part of using Clarice and Nathan as the main characters in this book is that they are not characters with massive stories outside the Age of Apocalypse. In fact, both characters are almost strictly characters only seen in this world. Nathan Grey is the genetically created child of Scott Summers and Jean Grey, grown in a lab run and created by Nathanael Essex (Mr. Sinister). In the Marvel Comics prior to the Age of Apocalypse, Nate Grey is the child of Scott Summers and Jean Grey’s clone who is then infected with a techno-virus (by Mr. Sinister) which has no cure in this age so Nate Grey is taken to the future where he becomes Cable. Nathan Grey in the Age of Apocalypse is Cable without the techno-virus, which means the character development is completely different, as Cable and X-Man have vastly different histories. Clarice, though, only made her debut in the comic books when the Phalanx showed up in the crossover. Clarice was introduced and then sacrificed herself to remove the Phalanx. Both of these characters were born and raised in the Age of Apocalypse and while readers are passingly familiar with their genetics and their powers, these two characters are unique and readers have no preconceived notions of their character or their stories. 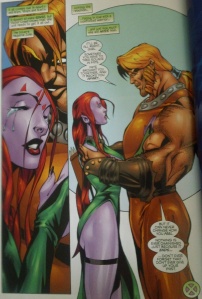 The main reason the X-Men comic books always appealed to me is that they took people who were noticeably (or not noticeably) different from the prescribed societal norms and gave all those different people a place to belong. A place they feel welcome and can call home. A place where they can make a positive difference in the world around them. For any minority population, the X-Men are a group of people who inspire hope – a hope that the world can be a better place, but that any dream worth having is a dream worth fighting for. Even through all the darkness in the world, there is always hope.

There’s a part in this book where Sabretooth is talking to Blink and he says: “It’ll be all right, girl. Sometimes you have to take solace in fate. Fate brought you together, and it broke you apart. But it can never change how you feel. Nothing is ever diminished just because it ends … don’t ever forget that. Don’t ever give up on your past.” And once again, I find myself having all sorts of feels because of a comic book telling me that I am who I am for a reason. Even though I sometimes like to hope that the way my life is now is not the way my life will always be, that someday I will be able to share my life with someone I love who also loves me, it’s something I forget sometimes.

Most of the comic books collected in this compilation are actually ones I might have in storage at home but not ones I have with me now, and possibly ones I don’t recall reading. When the original Age of Apocalypse hit in the mid-1990s, I was in high school and my sources for money were severely limited, especially with college looming on the horizon. Of the comic books collected in this volume, I think I only have two of them, so most of this story was quite new to me. Even though the story was new to me, it still flowed in logical order and it only made several references to comics I had not yet read. So when I say the story still makes sense even if you didn’t read these as they all came out over 20 years ago, I mean it.

One of the things I like best about this compilation is how Marvel Comics takes all the issues from a massive event like this and puts them all in chronological order so you don’t have to jump from one graphic novel / trade paperback to a different one in order to figure out what’s going on and when it happened. This storyline is all complete and chronological, so it makes perfect sense, even if you’ve never read these comic books before. Then, they even number the books so you know what order to read them in. It’s very convenient and makes this a lot more like reading an actual book, just a book that also uses pictures to tell the story.

Overall, I’d happily rate this book as a high three on my rating scale. I’m happy I own it and I will continue to reread it periodically in the future.

These books talk about hope without being preachy about it. These comic books have real messages about making the world a better place. So to the artists and writers, to all the creators and creatives out there, thank you for what you do. The books, novels, artwork, graphic novels, fanart, and everything you create matters. Keep doing what you do and maybe we’ll all someday live in a better world, filled with more hope.