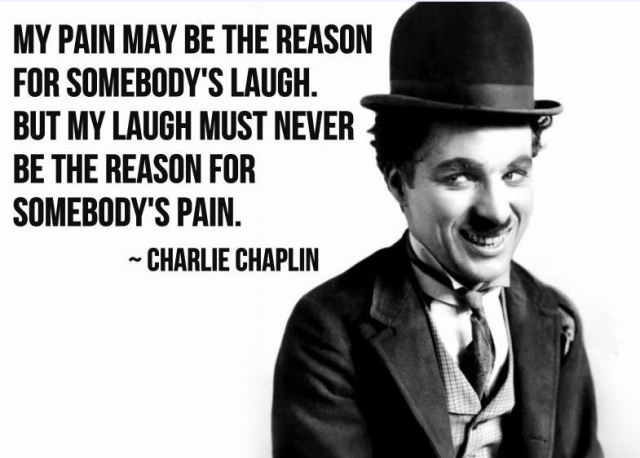 A philosophy I very much live my life by.

Yeah, too bad he was a Nazi.

I’m assuming by “he was a Nazi” you meant he played a PARODY of Hitler in a MOVIE and in that same movie he also plays a barber who disguises himself as said Hitler parody and delivers one of the greatest anti-fascist speeches of all time.

In fact, Chaplin was harshly criticized by the American far right for being very anti-Nazi in the period leading up to America’s entry into World War 2, and many lambasted his film, “The Great Dictator,”–in which he parodied and ridiculed Hitler–as “anti-German” and “war-mongering.” The Nazis themselves, as well as the Nazi sympathizers and supporters of the American far right, hated him.

Chaplin’s films were banned in Nazi Germany, and Nazi propaganda smeared him constantly. (Part of the smear was claiming he was Jewish–which he was not, but calling someone Jewish in Nazi Germany was guaranteed to inflame public sentiment against them.)

Chaplin was concerned with social issues like homelessness, and was a liberal and an anti-Nazi at a time when to be either one (let along both) was to be accused of being a Communist–which at the time was pretty one of the worst things you could call someone–and indeed “anti-American.” (Because, again, American conservatives loved them some Nazis–right up until the time Hitler’s forces started invading other countries–and even then, the bulk of the US thought we shouldn’t “interfere” in what they saw as a strictly European affair.)

Even after the war, and even after the world realized the despicable things the Nazis had done, Chaplin couldn’t shake the “Communist” and “anti-American” accusations from conservative American “journalists,” politicians, and others on the far right, who were still angry with him for his pre-war anti-Nazi sentiments.

And when he refused to participate in the McCarthy’s “Red Scare” Communist witch-hunts of the early 1950s, he was banned from re-entering the United States, while on a trip to England.

In short, Chaplin’s ANTI-NAZI leanings made him so many enemies in the US that they set off a chain of events that eventually saw him kicked out of the country. Oh, sure, the US finally issued a formal apology and invited him back, but by that time, his response was pretty much, “Yeah, too little, too late.” And justifiably so.

Chaplin stood against everything the Nazis stood for, and was smeared and punished for it.

So don’t you fucking dare call Charlie Chaplin a Nazi.

The Nazis hated Charlie Chaplin so much they listed him in their Big Book of Jewish Enemies, despite him being gentile. No, really: http://www.telegraph.co.uk/news/uknews/1579971/Nazi-propaganda-book-targeted-Charlie-Chaplin.html