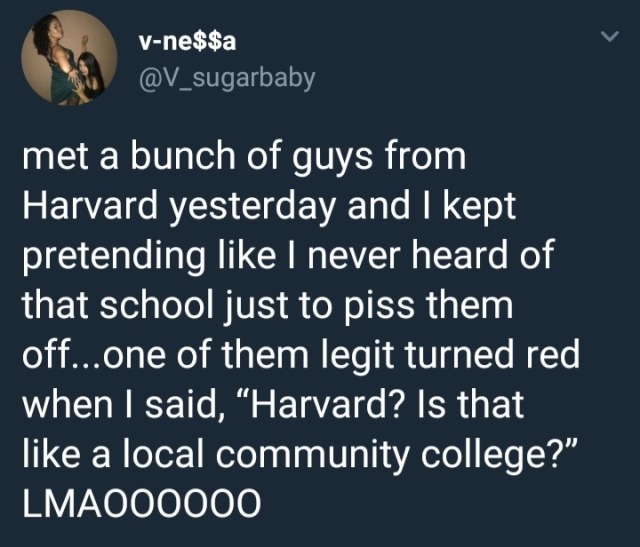 Harvard? Never heard of her

Want a more subtle way to accomplish this same kind of power move? DON’T ASK WHERE IN BOSTON. Story:

I go to a fancy grad school, where a lot of folks did their undergraduate degrees at fancy places. The two schools whose alumni here are the most full of themselves about it are Harvard and MIT. They’ll drop the name of their alma mater at any and every chance they get. However, upon introductions, they all name-drop it in the exact same way, that YOU can take advantage of. They want it to go like this:

This way, they can act like they’re trying to be humble and not mention it, but then because you asked, they can brag. Now, I am from a midwestern public football university, so I get a little sick of people pulling this kind of stunt, especially because the same people give me a down-their-nose look after I say my school. So, I have learned that it is WILDLY hilarious to make the conversation go like this instead:

“Where did you do your undergrad?”
“Oh, I went to school in Boston.”
“Neat; that’s a cool city. Hey, have you all seen the latest Star Wars movie? [Or whatever subject change]”
*stunned and frustrated silence because they have no excuse to name drop*

They can’t bring it up the topic change because it would be rude, and because the obvious response is that everyone knows that “where did you do your undergrad” implies what school, not what city, so they were being unhelpful in the first place. Anyway, for the small percentage of people that regularly meet braggy Boston alums, go get ‘em.