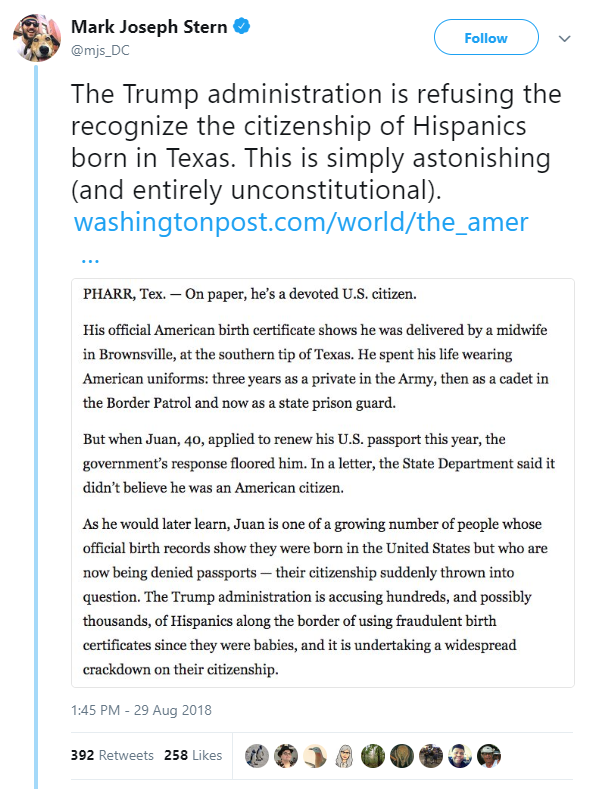 many people have been saying since the beginning he is going to come after citizens. First he came for undocumented, then for green card holders, and now for actual citizens. This doesn’t end with just that.

This is also happening in the context of an extremely close Senate election in Texas where a Democrat, Beto O’Rourke, is in a statistical tie with wildly unpopular Republican incumbent Ted Cruz. There’s a lot of energy on the Democratic side of this election, especially in this state, and you know what happens if your citizenship is in question, if your birth certificate is no longer proof of where you were born?

The talk of “voter fraud” was blatantly itself fraudulent.

A member of the President’s now-defunct voter fraud commission is
speaking out. NPR’s Don Gonyea talks to Matthew Dunlap about the panel,
which he says was set up to validate the president’s claims.

And with this denaturalization of citizens, the racist focus on “illegal immigration” becomes clear as another way to excise the people Trump et al do not like from the group of citizens and voters who get to decide.

With gerrymandering Republicans have gotten reliant on being able to choose their voters rather than having the voters honestly choose them.

They know suppressing the vote or removing Americans from the American public is the only way for them to win. But even with all of this, honestly? Turning out can still stop them.

This stuff isn’t entrenched yet.

The key word there being “yet.”

I read on Vox that nearly 50% of Millennials aren’t planning to vote this November… well, it might be the last time a lot of us can vote. And if it is, it won’t be the Boomers who are entirely to blame. It will be every Millennial who could have voted and didn’t.

Here’s where to register to vote: https://www.usa.gov/register-to-vote

Also, you need to vote in your state’s primary elections.

Just another crazy person, masquerading as a writer.
View all posts by C.A. Jacobs →
This entry was posted in Uncategorized and tagged elections, please vote, politics, VOTE. Bookmark the permalink.