this picture is making me really angry

Tomoe Gozen. 12th Century Japan. Concubine of Minamoto no Yoshinaka, and one of his most famous warriors, called a Demon in Battle and renowned as a swordswoman and archer. Was ordered to flee the final destruction of the Minamoto Clan at the end of the Genpei War by her Lord. While leaving the battlefield, encountered a group of enemy soldiers: rode straight into their formation, pulled their leader out of his saddle, pinned him against her horse, and took his head. She then vanishes from history, never to be heard from again.

Queen Boudicca. Britain, first Century AD. Queen of the Iceni tribe of Celts. After her daughters were raped and she was flogged and humiliated by Roman soldiers, led the Iceni and other tribes of Britain in revolt, leading to the deaths of tens of thousands of Roman soldiers and a near-rout from the British peninsula. Was finally defeated by the Roman general Suetonius, and committed suicide to avoid capture. Is probably the only woman to have her statue in a city she burned to the ground (London).

Princess Zhao Pingyang. 7th Century China. Daughter of Emperor Gaozu. Raised an army on his behalf and led them into battle. Was given full military honors upon her death: one of the only women so honored in Medieval China.

Queen Suryothai, 16th Century Siam (Thailand). Fought in single combat against a Burmese Viceroy, sacrificing herself to save the life of her husband and King.

Aethelflaed of Mercia. 10th Century Britain. Well known for her skills as a tactician and for building many of the castles in Mercia that still stand to this day.

Khawlah bint al-Azwar. 7th Century Arabia, a contemporary of the Prophet Muhammad (pbuh). Once rallied a group of female prisoners into defeating their Byzantine captors using their tent poles. The namesake of the UAE’s first women’s military college.

Finally, let me tell you about what the women were doing while the men were out in some cold, wet field, having their bodies hacked at with swords and axes. They weren’t sitting around a hearth gossiping with their friends. While the men were out fighting, the women were working the fields every day, bringing in the harvests, slaughtering animals, butchering, preserving meat, working their goddamn asses. off. They kept the houses secure. They repaired roofs and spun wool into thread and wove thread into cloth: difficult work today, backbreaking in medieval times. Often times, they did these things while pregnant or raising small children.

They faced disease, starvation, and the constant threat of having some band of raiders come in and rape, pillage, plunder, and slaughter them while their menfolk were off fighting in war. Medieval women, even those who did not fight, were hard, determined, and skilled experts in the arts of survival, farming, weaving, spinning, and motherhood who engaged in backbreaking labor that often killed them at a young age, and they deserve better than to have some adolescent-minded asshole sitting in his warm, comfortable first-world home rant about “feminine privilege.”

So fuck you, original poster. I hope you step on a LEGO. 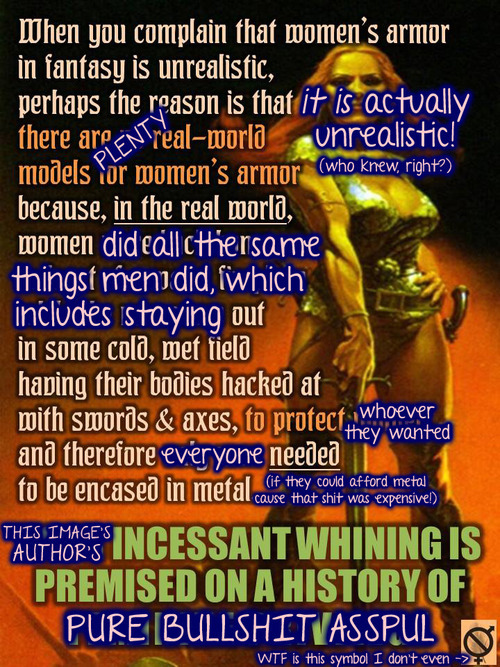 Did my best to fix it

Just another crazy person, masquerading as a writer.
View all posts by C.A. Jacobs →
Image | This entry was posted in Uncategorized and tagged feminism, sexism, women's weapons. Bookmark the permalink.