Several months ago, I went and saw the movie Ready Player One and I enjoyed it a great deal. I wound up looking for books to read and decided to pick up the book Ready Player One (science fiction 372 pages) by Ernest Cline. 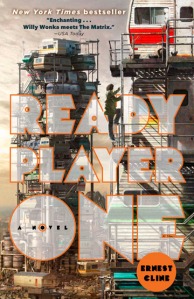 “In the year 2044, reality is an ugly place. The only time teenage Wade Watts really feels alive is when he’s jacked into the virtual utopia known as the OASIS. Wade’s devoted his life to studying the puzzles hidden within this world’s digital confines – puzzles that are based on their creator’s obsession with the pop culture of decades past and that promise massive power and fortune to whoever can unlock them. But when Wade stumbles upon the first clue, he find himself beset by players willing to kill to take this ultimate prize. The race is on, and if Wade’s going to survive, he’ll have to win – and confront the real world he’s always been so desperate to escape.”

So this is probably one of the only times when I can say that I actually liked the movie better than the book, even though the book came first. Usually, I have this thing I’ve noticed that whichever came first is usually better and usually the books come first. So in this case, the book was published in 2011 and the movie came out in 2018 and I actually did enjoy the movie a lot more.

Art3mis/Samantha is absolutely a more flushed out character in the book and Parzival/Wade takes a long time developing a crush on her in the book. Actually, looking back on the movie, Parzival/Wade did mention that he’d been following everything that Art3mis/Samantha posted for years but the movie didn’t have the time or necessity to flush that out other than to just mentioning it in passing. I also really liked how in the book, Art3mis was the very first person to find the first clue and how she was able to work on the clue while still keeping the entire area a secret.

The publication date on the book is actually a pretty heavy influence on why I think I liked the movie better than the book. It’s interesting to me exactly how much can change in such a short amount of time, but the technological changes and the societal changes are actually notable in this case. I feel a little bit like the movie captured more of the fun of gaming and how the OASIS was never meant to be a one-person game. The movie had a lot more team work and a lot more times when the “High Five” were shown as actual friends but the book had them as competitors almost the whole time. The movie also had a diverse cast across different age groups instead of everyone being from high school. In the movie, Aech is definitely not in high school and neither is Sho, as he’s only 11. Aech was absolutely my favorite character in the movie and was given a lot more background in the book. I really liked Aech’s mechanic shop in the movie and I wasn’t as fond of Aech’s highest ranked combatant skills as much, though I did like the twist that Aech was great at slaughtering all the other players in combat and no one knew that Aech wasn’t just some guy. I did like the twist in the book quite a lot, actually. I also liked in the movie that Aech was the one who called the authorities after getting the confession in the workshop.

To me, this book feels like the main character was a 30-something year-old man and not a teenager. I didn’t really get the sense of immaturity or uncertainty that tends to be prevalent in the younger generations and Wade had a lot more confidence than I would have expected. Wade had no issues with leaving his physical living area, setting up a false identity, and moving basically across a barren wasteland all by himself and no one seemed to question the fact that he was clearly a teenager? As I’ve gotten older myself, I’ve noticed that teenagers clearly look like teenagers. Unless in this dystopian future, everyone is in such dire straits that everyone just looks older and more worn out? But I constantly questioned Wade’s age in the book.

I will say that the challenges and world-building in the novel are very different and very interesting. Obviously, a movie-going audience doesn’t have time to sit through the entire Monty Python movie, nor War Games which is why those were the challenges in the book. The movie also needed to change the challenges in order to match the pacing of a movie and to add a ticking clock to the mix. I also liked the idea of having to use the treadmill to exercise before it would let you into the OASIS. It was really neat. If I could power my binge-watching of shows via walking on the treadmill or being on the stationary bike, I would absolutely do that and probably spend more time binge-watching or playing games while I walked on the treadmill.

The book was interesting. I did buy it and I might read it again at some point in the future. Overall, I’d say the book is probably a high two on my rating scale. While it had a lot more interesting references and I knew absolutely everything mentioned in the book, I was still a little disappointed that this wonderful bit of 80s lore didn’t include anything from the pop culture that didn’t include men. And I really liked the team work aspect of the movie over the lone competitor aspect of the book.

Just another crazy person, masquerading as a writer.
View all posts by C.A. Jacobs →
This entry was posted in Book Reviews and tagged Book Review, Ernest Cline, Ready Player One. Bookmark the permalink.