So if we wanted to watch some French animation, what films would you suggest? 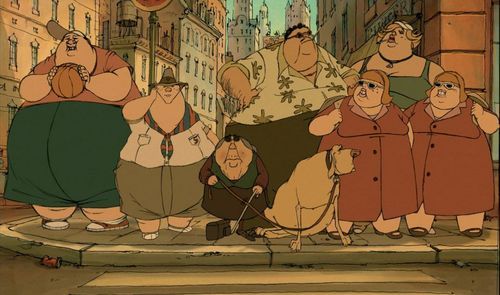 the Triplets of Belleville is about an elderly woman searching for her son who was kidnapped in the middle of a Tour de France race. It’s largely free of dialogue, but the sound effects and such are wonderful. It was nominated for an Academy Award for Best Animated Feature—it lost to Finding Nemo. 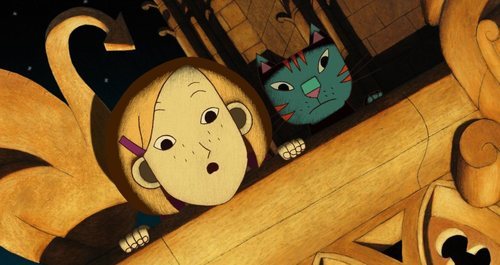 A Cat in Paris is about a young girl and her cat who discover mysteries in the course of one night. It was also nominated for an Oscar for Best Animated Feature, but it lost to Rango. 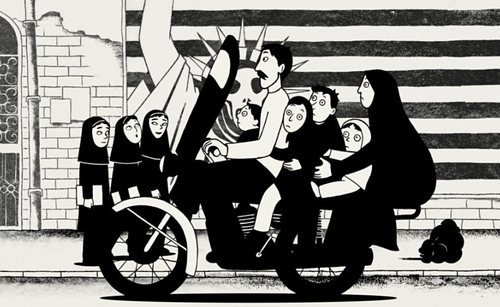 Persepolis is based on an autobiographical graphic novel by Marjane Satrapi about her early life in Iran. It was nominated for an Academy Award for Best Animated Feature, but it lost to Ratatouille. 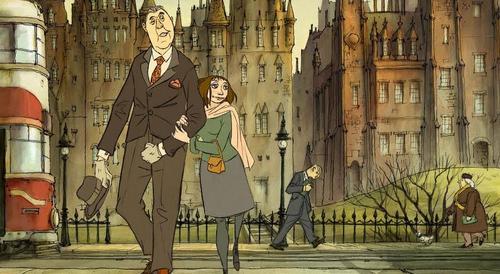 the Illusionist is about an aging magician and an imaginative young girl who form a father/daughter relationship. It was also nominated for a Best Animation Oscar, but lost to Toy Story 3. 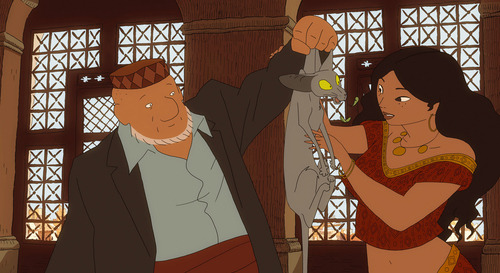 The Rabbi’s Cat is a story about a cat who swallows a parrot and gains the ability to speak like a human. It is set in 1920’s Algeria. 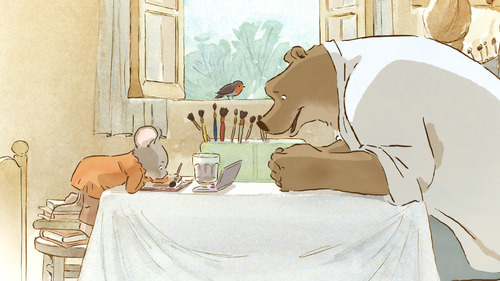 Ernest & Celestine is the adorable story about a big bear and a little mouse who forge an unlikely friendship. It was also nominated for an Oscar in Best Animated Picture, but lost to Frozen. 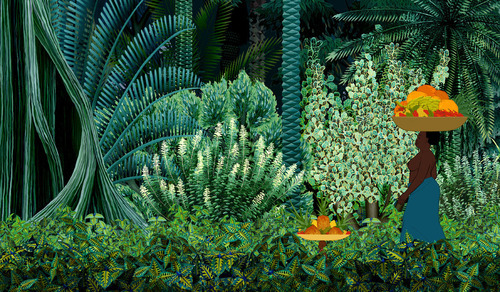 Kirikou and the Sorceress is a story inspired by West African folklore that tells the story of Kirikou, a boy who was born with the ability to walk and talk, who saves his people from an evil witch. The film was popular enough to spawn sequels and a stage adaptation. 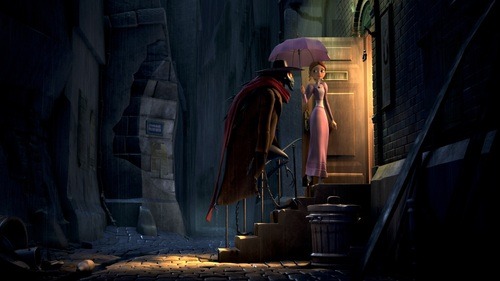 A Monster in Paris is a 3D animated musical film that is reaaaaalllly loosely based on the Phantom of the Opera. It’s set in 1910 and is about, surprisingly, a monster that lives in Paris, and his love for a young singer.

The King and the Mockingbird is an 80’s film about a cruel king titled Charles V + III = VIII + VIII = XVI, who is obsessed with a young shepherdess, and whose attempts to capture the young girl are thwarted by a mockingbird whose wife the King had previously killed.

Those are probably the most famous of the feature length animated films.

But the animated short films are just as glorious. Here’s a compilation of a bunch of short films and I can link you to others as well.

Sorry for the long answer but I just really love French animation.

Reblogging over here. French animation tends to do better with diversity than Disney does, hahaha.

I should add “Le Tableau” which is really beautiful, especially if you love art. This movie is highly poetic !

“A château, flowering gardens, a threatening forest, here is what, for mysterious reasons, a Painter has left incomplete. Three kinds of characters live in this painting: the Toupins, who are entirely painted, the Pafinis, who lack a few colors, and the Reufs, who are only sketches. Considering themselves superior, the Toupins take over power, chase the Pafinis from the château, and enslave the Reufs. Convinced that only the Painter can restore harmony by finishing the painting, Ramo, Lola, and Plume decided to go looking for him. Throughout the adventure, questions will follow one after the other: What has become of the Painter? Why did he abandon them? Why did he begin destroying some of his paintings? Will they one day know the Painter’s secret?”

I would highly recommend Ernest & Celestine as the animation is beautiful, the characters are really moving and the story conveys a great message about love, friendship and oppression.

Another thing : have you seen how these amazing movies lost to american big productions ?

They didn’t forget! Kirikou and the Sorceress, up there.

May I suggest Dragon Hunters for myself? This 2008 feature-length film is based on the 2004-2005 cartoon Chasseurs de dragons, by the same makers (available fully online, by the way). The music, by Klaus Badelt, is hypnotic. The world is beautiful and strange, the characters lovable… and the dragons, really good.

hey, wthat about Le jour des corneilles? Its one of my favorites french films

I need to add a few movies myself:

A young russian girl goes for a trip to the North Pole to find the boat that her grandfather, a famous explorer, used for his last adventure during which he disappeared…
Visually stunning, and very cool story and characters.

The story is set in a world where science never went further than steam and coal, since it’s been years that all scientists have mysteriously disappeared. April is the daughter of two scientists who disappeared when she was a child. As an adult, April too turns to science in secret, and will discover the reason why scientists have been disappearing all this time.
Humour, atmosphere, mystery… And based on the graphic style of veteran legend comic book artist Jacques Tardi!

The everyday life of Aya, a young woman who lives in Ivory Coast at the end of the 70s. Very nice mood and humour!

A young african boy goes after his older brother who left to fight for France in the war. This will lead him for a whole trip to Paris and beyond.
I mainly like it for the graphic style. An interesting look for a 3D movie since they used animated textures.

By far my favorite movie adaptation from the Astérix comic books series. This one revolves around an ingenous plan set by Caesar. He builts fancy appartements  for rich romans near the Gaulish village, hoping that the Gauls wont attack civilians but will sitll get annoyed enough by the roman population to want to leave their village… and the plan works way too well.

How 2 guys from a popular neighboorhood of Paris spend their holidays after being robbed of their trip to a paradise location. One of them tries to borrow money from a local criminal, and the other one finds a job in a rich family.

Very funny, but very not for children as well (drugs, violence, swear words, and sex!)

The Tuvache are a really rich family in a town where nobody is happy to live. They made fortune in selling suicide articles. Unfortunately for them, their youngest son is a really nice, happy little fellow who wants to make people’s lives better…
the first half is really worth watching, for the black sense of humour and originality.

For all you Ankama / Dofus / Wakfu fans! And for the others as well, since it’s not required to already know the Wafu universe to understand the movie.
Follow the adventures of Joris, a young orphan who lives in a wolrd where the Dofus are special magical dragon eggs that grant tremendous power to their owners.
Extremely good animation and funny characters.

A movie by the same director who made Le Ableau, Jean-françois Laguionie.
A tale about two populations of monkeys, one tribe that lives at the top of the trees, and one that lives on the ground. One day, a young monkey form the tribe of the top will go meet the tribe of the bottom, who seem to live in some medieval kind of way.

Now that is one weird movie. About a unicorn named U, who came to help a girl who is not happy with her parents cruelty. Bur that girl isnt very nice herself…

Now a last quick word about studio Folimage, which is the one that produced A Cat in Paris: most of their movies are must-see. Like, really. Just look at all these visuals!!!

They also produce short movies that can be gorgeous. My favorite is Le Bisclavret!

Just another crazy person, masquerading as a writer.
View all posts by C.A. Jacobs →
This entry was posted in Uncategorized and tagged animation, french animation. Bookmark the permalink.